< Back to list
Thessaloniki Airport wins the Gold Title and takes off the Aluminium in Architecture Awards!

Double award for ALUMINCO, which received the best reviews and was distinguished for two very important and particularly demanding projects.

The project “Thessaloniki Airport Macedonia”, a pioneering project for Greece that became a reality, won a Gold Award, while the company won another award for the project “Soho City Montenegro”.

The new Thessaloniki Airport is a project with a positive impact not only on the wider region of Macedonia but on the whole country. The design innovation of the architects Loukas and Theophanis Bobotis was brilliantly captured with the production of a tailor made glazing. The special ALUMINCO SKG120 system designed by the company was the only façade system that successfully “unlocked” the architectural ambitions of Bobotis + Bobotis Architects, while it meets the modern functional standards of airport design and the demanding technical specifications set by Fraport Greece and Intrakat from the very beginning.

Bronze Award for the luxury property complex in Montenegro, with Soho City investors calling for an innovative approach to construction, with technology playing a proactive role in the construction and buildings designed in accordance with modern architectural principles for sustainability and viability.

ALUMINCO aluminium systems have been identified as the trend of this century and have been perfectly combined with modern SMART technologies. Among these are the new, high-end, retractable ALUMINCO SL2700, a high thermal insulation system that offers large-sized openings with impressive features; the advanced ALUMINCO W4750 & W4900 window systems, with impressive performance and a high level of security; and the ALUMINCO EW50 façade system, which brings the possibility of maximum natural lighting to the interior, creating an ideal environment for building users.

The organization of the awards was carried out by Boussias Communications and the awards were announced online on April 23 with the chairman of the jury, Mr. Dimitris Bikas, stating that “The jury had the difficult task of evaluating a significant number of highly successful and innovative applications, where aluminum structures project their decisive presence and contribution to the aesthetic, morphological, functional and construction expression and quality of the projects and to award the contributors of those

ALUMINCO’s Marketing and Communication Director, Mr. Spyros Greveas, pointed out “It is so gratifying and important to see that the efforts, creativity and investments of our company’s products are rewarded. We are facing stiff competition, but both the gold award for Thessaloniki Airport and the bronze award for the luxury real estate complex-Soho City in Montenegro-show that Aluminco has the right combination of sustainable design, performance and innovation with clear processes and objectives that appeal to major projects from around the world.

Especially for Thessaloniki Airport, the second largest airport in Greece and one of the most modern in Europe, a big thank you to Fraport Greece and the Intrakat Group for their trust and to the architects Loukas and Theofanis Bobotis of Bobotis+Bobotis architects, for their particularly impressive creation.”

ALUMINCO stood out once again for the application of its innovative architectural systems to complex projects of extreme requirements and specifications while committing to continuous research and development of tailor made façade solutions with high potential. 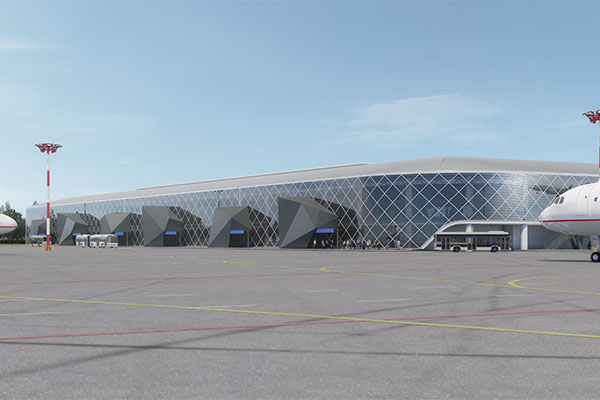